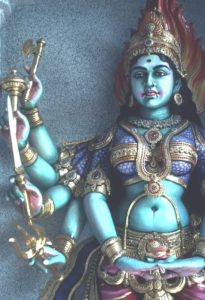 Do you remember where you first read the name Khechari Mudra? Did your mind log it for ‘later’ or dismiss it completely? Was this perhaps because of the mystery it used to be shrouded in or the unpleasant means by which you had heard it could be attained? Maybe you thought some ‘tongue folding exercise’ couldn’t be ‘all that’ and so you’d focus on the other aspects you were currently working with – perfecting headstand, or perhaps the most advanced possible headstand. Maybe it was a full Pretzelasan with your legs half way down your back, or possibly simply remembering not to worry about all that grasping and striving for the most advanced and ‘impressive’ yogasan/a.

I remember when first  encountering the name ‘Khechari’ it had a particular ring which inspired. Throughout my life I have been a bliss junky and really enjoyed leaving my body, whether it be spontaneous, or induced endogenously or exogenously. I’d had a few scrapes at death’s door and learned in my twenties that I just couldn’t run away from myself, no matter how hard I tried.

It was time to deepen. That meant meditation and self inquiry, understanding the bioenergetics of both and how they interwove as one. As a child and due to illness, I had entered Samadhi states and craved for them once again. I always believed the cure was in the pain and this was highlighted for me by the fact that without chronic asthma I might not have made much effort or had to seek the deeper meaning of life. It was through being terribly unwell so many nights that I had the opportunity to enter deep trance states, dream with clarity or project astrally.

I’ve always believed ‘Thy will be done’ and also realised the all powerful Godhead resides in each one of us patiently witnessing the ripening or dissolving of karmic seeds.

I remember reading in one of the Yoga Shastras in India of the application of and apparently amazingly powerful effects of this mudra khechari – I think it was the Shiva Samhita. At the time I was further researching the cure for asthma, a journey I had been on for 30 years at the time.

As many tend to do while travelling throughout the Indian states, I amassed a collection of yogic literature. It clearly pointed me in the direction of the freedom of a permanent cure for asthma and its relatives; hay fever, sensitive skin and other allergies such as ‘general sensitivity to homo-sapiens’.

I remember folding the pages in the small shastra, while drinking some fresh mint tea one night – hoping to be able to return to them some day to ‘learn khechari’!

Years passed. Being a full time teacher I found myself saying ‘Sat Cit Ananda’ while students lay in nidra near the end of many classes. I always feel a great glow from within as those words leave my lips. However, that inquisitive human mind of mine kept asking;

Like some folk in the classes I taught, I sought ‘the mental Bliss of the yogin’ – a certain bliss I could tap into any time or place and perhaps have an intensity control too. It is a bliss that pervades all layers of one’s being; from the deepest-darkest it outwardly illuminates the mental, emotional and physical bodies, with its radiant luminescence.

Many hops, skips and jumps later, also practicing/teaching Tai Ji and Nei Gong, my understanding of alchemy deepened and I embraced the unity of the Indian and Chinese practices.

The years of ‘outer cultivation’ via Qi Gong practices, interwoven with years of intense daily bandha and kriya work and, once again rewoven with Nei Gong or inner Taoist cultivation slowly led me to Khechari Mudra (One who wanders through space into Brahman’s expanse (my own COLLOQ  interpretation)). On the 12.9.2012 my tongue slipped upwards beyond the tendon behind the uvula and another chapter began.

This was for me, as for many at first, quite sexual. The A &P of the experience involves circuitry connecting body to brain and being that certain channels run all the way from the pelvis to the higher cerebral centres, it’s no surprise one might experience this thrill as the linga (tongue) slips past the uvula (clitoris) into the yoni (nasopharynx).

I had studied the ‘Union of Human, Earth and Heaven’ in the Tao and always intuited this was the flagship back home – a way to continue conscious journeying of the spirit towards soul whether it be temporal or post mortem. In 2000 during meditation I experienced the Ouroboros – I ‘was’ the chi and the channels through which it flowed as the life forced coarsed through my governing and functional meridians (aka Microcosmic Orbit or M.O).

Many moons later, now in khechari  there was the quick recognition that the tongue is indeed a live-wire-switching mechanism to aid the flow of energy moving through the MO and flying up and down through the central or thrusting channel. In terms that many yogins recognise, the tongue in khechari brings the sadhaka ‘IN to sushumna nadi’.

Isn’t this partly why we’ve been practicing all that Nadi Shodana and Kumbhaka? Hereby we have the yoking of ida and pingala, the heavenly union of yin and yang, the self intercourse or perfect inner harmony. All being well this is said to lead to ‘outer manifestation’ and one enters the heavenly kingdom while the feet are still firmly rooted to the earth.

What does this all mean in practical terms? Quite simply, profound healing and awakening ensues. All those benefits we have been deriving from asana /pranayama and meditation continue. For me personally, it was similar to regular Uddiyana Bandha and Nauli Kriya practice – both were quantum leaps in the evolution of the execution, alignment and presence during my day to day ‘yoga practice’ and more importantly, daily life itself. Teaching yoga became so much easier as I enjoyed ever increasing strength, depth and clarity. The clarity reveals simplicity and through all of these we deepen down in to our prenatal and primordial roots.

I now feel I understand why so many have difficulty connecting to breath work and meditation. Through my lens, it appears that without the direct experience of shakti (the physical energy) there isn’t sufficient fuel to ignite shiva (conscious awareness) and, vice versa. When however, we practice exercises whereby we feel something tangible moving within, which progressively becomes more and more blissful – the practice literally electro-magnetises us. The application of bandhas, mudras and pranayama progressively ‘automate’ in a more subtle and blissful manner, as opposed to wilful engagement.

‘Kali welcomes us, enthrals us, thrashes us and helps us release ourselves from the bondage we create in searching outside ourselves for that which can only be obtained from within’.

As my practice grew I observed the above mentioned automatic bandha-pranayama-kumbhaka cascade which because of the interconnectivity of all subtle and gross nadis/channels, enlivened the tongue and eyes to turn inwards and upwards towards to the God/esshead (pituitary and pineal glands).

When the yogin enters sushumna there continues our deep journey into the ‘land that time forgot’ and ‘the land of milk and honey’ awaits.

When my tongue first tasted the ‘milk and honey’ or Amrit (nectar) that lies within the nasopharynx, it was as though all wishes had been fulfilled. The sensation is deeply intoxicating, inviting one to ‘drink’ as often as the body/kundalini allows.

In the same way it is very difficult to un-see the seen, when we have felt the bliss of samadhi states; the absorption of the mind in the body, body in mind and both in soul – whether by natural or exogenously induced means, the desiring heart will crave a refill.

I am very aware of the words of the wisest – “S/he who desires nothing has it all”, yet for this mind-body-organism, to be able to dive deep, quickly and most often very blissfuly, in almost any circumstances – this must be a winning strategy. Meditation and this boon khechari, they educate the craving’s of the monkey-mind;

We really are all that we seek – AnandaSwarupam – Embodiments of Bliss.

We have missed this for eons, no matter how much the sages have reminded us. We have spent so much energy going out, way out into space, boldly stretching the limits of the mind and the generous bounty of Gaia-Mother to perhaps finally catch up with these wise beings. They taught of our multi-dimensional self, which can ‘know the world without going anywhere’ – our innate ability to astrally as well as physically abide. This means the certain deepening of one’s asana, pranayam and meditation as well as all other experience, while awake, dreaming or projecting. The healing and energising empowerment is immense, something one can feel each time the gaze turns inwards, following the magnetic pull of sweet khechari.

If you would like to know more about the wonderful practice of Khechari Mudra please private message me.

ps – Khechari is commonly referred to in the patriarchal system as the King of Mudras’. However as Kali, (mother of my demon-destroying) came to show me how, initiating me from within, I think it wise to pay my obeisances to Ma.