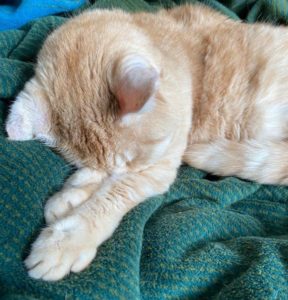 She was a big part of our family for all that time, through the thicks and thins. I remember when I first met  and shunned her as a  1 year old kitten how she playfully attacked my shins as I walked across the room. Nothing to compare to my Boobie, another family cat who also lived to 19 who was at that time about 17 and ‘took no prisoners!’

The years  that followed taught me otherwise about Milly as she nestled her way deep into my heart, where forever I hug her as she “brrrrrrrr’s” 🙂

She mothered and probably became a great grandmother via her four sons, Iggy, Tiggy, Goggles and the ‘Other One?!’ One of the things I have learned through knowing Milly is the Guru comes in so many forms. She was the embodiment of truth and love.

She loved to be true and was true to her love.

One of the blessings of Covid Life was that we were able to spend so much time with and around Milly in the last 15 months. It was a wonderful retreat in that we so rarely had to leave her alone for more than a few hours before retuning to feel her purr which always kept the house warm, welcoming us home in her delight.

One of the joys of watching Milly grow older was how her wisdom blossomed. She had moved home with us about 7 times in all those years. The minimum duration a few months and the maximum about 7 years twice over. Forever flexible in nature and body, she always adapted with joy to her new territory and as far as we could tell, was always the Queen of the Manor, loved by all our neighbours and passers-by. Not scared of foxes or unpleasant human beings she was truly inspiring not just to the four legged.

So, the essence of this blog is really to share with you about Milly’s final week here on earth and some of the experience that I went through as well as the lessons. Milly had developed kidney disease last year and in the last few months of her life this became troublesome for her. She had pains at times and voiced this without fuss. In the last month of her time here she disappeared under my my Step Daughter’s bed for four days, withdrawing from both the world and nourishment. We thought then that we might be losing her only to see her return to ‘normal’ for a while longer. On the Sunday of the last week of her life, I went upstairs in the afternoon following a very strong meditation and was filled with sadness when I saw her next to our futon as I stood on the landing. I knew she was leaving us, no matter how hard I fought it. I had prepared myself for this over the last few years. I have been practicing the mantra ‘this is now, this is happening now’ since I was a boy, had lost Dear ones early in my life and had learned the truth of our body’s impermanence well over 30 years ago.

I remember my mother telling me when I was a child that no matter how much you ‘think’ you are ready, your feeling emotional self always goes through some form of trauma and of course loss.

From that Sunday Milly stopped eating properly, having reduced her daily intake over the preceding days. She would accept a little cat~soup, a paste like treat (she loved them!) and then only some chicken, beef or fish water as each day went by. She still drank from the bath tap like the Queen of Sheba but on the Thursday and Friday had ceased all food. Although normally working downstairs during the day in between teaching classes on line, we moved the office to Milly upstairs where we had those extra and precious hours with her.

She became more and more restless as the poison from the kidney tumour spilled in to her bloodstream and sullied her mind and senses. When she could settle it was only a few moments and any time that I awoke in the night to reach out to her and see how she was doing, she sat awake poised as though wishing to be asleep.

I think it was on the Thursday that I sat alone with her during the day and said my ‘Thank You”. Only now as I write on the following Wednesday and following many tears from both Dorna and I, her mum and dad :), do I feel my eyes well. As the words came out from deep in my heart I realised,

The one thing I had never really seen was that Milly had been a true friend and companion.

She had been here to parent and comfort each and every one of us in the home and when friends and visitors came, Milly’s presence filled the conversation always. She telepathically told all of our friends that they should have pets friends too and we have since seen how the lives of those friends who followed her advice have been greatly enriched!

I thanked Milly for being my friend and teacher. I thanked her for being so honest and receptive to our love, to the cuddles which she blissfully bathed in right up until the last week. She was in so much discomfort that by this Thursday her skin was so sensitive that only the lightest of touches was possible at times. I asked her to surrender, not to hold on to us for us and to hold on only if it brought her closer to a peaceful release.

In yoga we learn Pratyahara, which means Withdrawal. The spirit returns to Spirit by withdrawing the power of life back inward through the sense perceptions and mind, toward the higher intellect and then homeward bound out in to the sky~space.

It was clear that Milly’s system was refocusing inside, initially preserving all life force to attempt to stay in her body. Her stillness drew my gaze inward. As her body weakened it shrunk to the size of a large kitten. Her back legs wobbled when she decided to get up to drink or pee and each time she returned to her spot by our bed she grew quieter. The magnetic pull through her eyes however, only grew stronger. Her little pupils were so dark and empty as the silence sucked life back towards itself.

Once beyond the Event Horizons all awareness of this dimension would dissolve as her light body whipped back through the Aum. It was clearly a matter of time before her quantum’s leapt back through that space.

As I looked in to her right eye for a minute or so, I lost all sense of relativity. I remember back in India with my Guru Sai Baba 20 years ago I had seen infinite deep oceans of love in his eyes. With Milly it was the same, yet the infinity was that of the Void, the depths of a black hole. I became bodiless as I peered in to the dark universe through her pupils and felt the pull which welcomed me to return ‘home’ too.

The gravity pulled my attention so intensely that I sensed the event horizon beyond which no~thing returns…..

And then spoke Sat Guru from the silent space ~ ‘Space is one, All bodies are One”.

It has never been so clear to me that Manifestation is Source projecting life outward from itself until the end of the reel.

Saturday dawned and by the afternoon we realised it was our duty to do anything we could to make Milly more comfortable. Before we knew it, we were standing with the Vet and showering Milly with last kisses and hugs. Tears of love steamed out as this gorgeous soul bowed her head and fell inside, inside.

If there is a message here

May it help you find peace.

Let it come from space

When there is quiet.