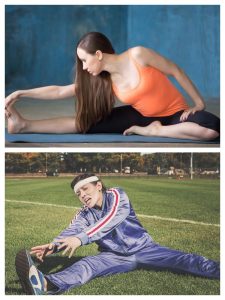 Somewhere along the journey, yoga in the west has become identified as a stretching system which is only suitable for flexible people. The number of times I hear someone say ‘I can’t do yoga, I’m not flexible’ has been enough for me to want to write about it, so that it can be shared not only amongst those who already do yoga, but those who don’t. I am sure that if you practice yoga, you have heard the same statement many times before. Perhaps we can turn this false belief around and hear them say:

‘I am inflexible, yoga is definitely for me!’

The physical side of yoga wasn’t developed for / by people who could do the splits and put themselves into knots. It was developed by people who started connecting to their body through movement and enjoyed it so much they spent more time moving and discovering their body’s full potential. As a result they became stronger and more flexible. Depending on what they started with (genes, bones structure, physiological tendencies, conditioning, lifestyle, etc…) and how much they practiced, some became capable of performing poses impossible for the majority of the population. Masters have shared their capabilities to ignite inspiration and although they succeeded in many cases, there are some for whom the goal seems so far away that they won’t even begin the journey (or stop as soon as they find their body’s limitations). The general belief that stops many from trying is : ‘I am not good at it’. The whole point is:

You don’t have to be good at it at all, it is good for you!!

We have been conditioned to want to do everything we do properly and at its best. Some would quite rightly say: unless you are prepared to do it badly you’ll never practice enough to perfect it. In yoga, we go one step further: you have to step aside and become ‘aware’ of movement and the breath and how you perform. To learn to yoga well, we need to first withdraw into ‘not doing’ and see what we’re actually doing, how and where you hold tensions. The more you do this ‘not doing’, the better you get to know the limitations that your habits have imposed on your body:

The tight leotard of your habits: 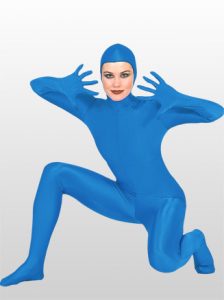 I’d like you to imagine wearing a leotard that covers the entire body from the toes to the top of your head. Now, imagine that it is getting tighter and tighter gradually (on a daily basis), but it happens so slowly that you don’t notice where your feeling of uneasiness is coming from. After years of wearing this slowly shrinking leotard, you start feeling uncomfortable so much so that you project this discomfort outside and, react accordingly. You do everything to forget this restlessness and go out of yourself to find a lasting escape from the feeling of being trapped inside. Out of nowhere, you start having difficulty to breathe, to sleep and you start having anxiety. All the things you’ve heard would worsen with age. As you see it happening around you all the time, you take it as a normality and give into it…
But perhaps there is another reason: Your fascia is like this leotard with the difference that it is not only around your entire body from the outside, but also around every cell, every muscle, tendon, ligament, organ…With age, with stress it tightens and in the same way that if you held one posture (let’s imagine sitting for hours on end), your leotard would lose its shape – your body’s fascia changes shape according to your habitual movement – or the lack of it. As the fascia looses its shape and takes on the shape of your habits, all the workings of the body are affected. I don’t believe this stops on a postural level, the fascia is very deep and hence all physiological systems are affected (circulation, nervous, lymphatic, glandular….). If you are not flexible, your fascia, your inner leotard has become very tight and is affecting how you breathe, think, relate to others and generally feel towards life.

Through yoga we start seeing the effect of our lifestyle in our body, we start seeing the habits that the body has picked up and we learn to undo those habits. As we work on freeing ourselves from the tight leotard of our habits, we’ll notice that this freedom gets reflected in our mind. This in turn changes our outlook and our tolerance for the world, for the better.

Leotard on, leotard off? The choice is yours! 🙂