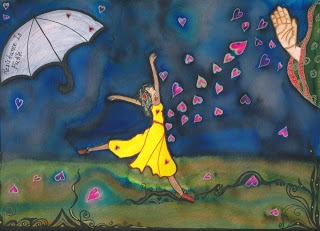 I sat and did an hour of asana practice in bliss of the breath and in joy of opening the body. Focusing on opening the hips towards half lotus (a posture I had done many times before). I got to the point of doing the final pose I had prepared for in the last hour. I was going to attempt it with more respect for the alignments following a safer way of entering into it, according to the instructions of a reliable teacher.

I bent my leg, checking the correct alignment of my shin and thigh bone, opened my foot with my hand and lifted my leg aiming to place it on the top of the other leg. Before I got there, as I was slowly moving and in my mind not using ‘force’, I heard a massive pop/snap coming out of my knee and, gasped in horror! I felt no pain, but was petrified by the sound and the possibility that such a gentle/slow action could create such drastic results. My faith in yoga was at stake, my faith that there is ever a way to perform a pose safely by following the anatomical rules was going out of the window. How could that be? I realised that there is a possibility that I don’t even know the meaning of gentle. I felt a mixture of emotions: fear, sadness, shock, disappointment, hope amongst many others.

I remembered our friend Michael Tetley. He’s an 86 year old physiotherapist whose wisdom I do not doubt and whose knowledge of the body surpasses anyone I’ve met. He once said to me: Dorna, the problem is you think you can know! Then he laughed the laughter that showed he knew how much mystery nature holds. Knowing how much he trusts nature, his words resonated so much with my heart. I knew he was right, as I know how curious my mind is and the underlying belief that has been implanted: ‘if you do it right, you won’t hurt yourself’. This is really the same as saying ‘if you live your life according to a set of rules, you’ll never face any challenges’.

As I sit here today, I know these statements may be true, but to find out what’s right for me and even begin to understand ‘right’ I need to carry on just as I do. There is no way to find out what the right way of doing something is, unless one does it, discovers, makes mistakes. Listening to what others say, following their instructions is almost impossible, because the knowledge is only on the intellect level and not experiential. Most of the instructions we hear is lost in our being unaware of subtleties within our actions. As I played back what I did, I discovered that my definition of force was not the same as those who said don’t use force. Force for me had a hardness to it, almost a yanking attitude towards the body. To avoid the same injury, I redefine force to mean the slightest resistance. Don’t force means don’t go against the subtlest of resistance and in truth, I admit, I didn’t know what resistance meant in terms of this specific movement.

Michael is right, I think I can know. As I remembered his words, shortly after the incident, my mind went to a silent place. There was no way to know and, my mind faced a wall. This dead-end stopped my personal stream of thoughts and I became conscious of a flow of insight that took me to a place of sweet sweet surrender.

When we are open to either there are no challenges. As much as we like directing and I believe we should – it is our nature – it is as important to be truly and genuinely open to both. We avoid pain and treat it as the opposite of healing. What if pain is ‘the process of healing’. What if a physical pain can heal an emotional problem? What if a challenge to the body, uncovers the illusions of the mind? What is this ‘health’ to which we attach so much importance? What is the healing that matters the most? For me, it is to live life with the least resistance, with true surrender. To be free of the disease of the perception of duality which puts ‘pain’ the bad box and ‘no pain’ in the good box. Puts ‘failure’ in the bad box and ‘success’ in the good box. I feel it in my bones that the attitude of duality is what takes away the sweetness of life. And, the attitude of seeing ourselves faced with life rather than seeing life emerging from within is what makes a dilemma.

For life, knee snapping, has no definitions. We’re the ones giving it a meaning. It means ‘I was violent’, ‘I don’t know what gentle means’, ‘I should know what gentle means, ‘my studies were useless’…Knee snapping is just what it is ‘ no meaning needs to be ‘attached’. A knee snaps and a set of necessary actions follows. With surrender, one set of actions is the same as another. A healthy mind knows reality is the best friend and anything else, the ‘should have’ and ‘could haves’ are illusionary friends which turn out to be foes. We give meaning to events, as if we know. As if we can ever know. Meanings give events and actions a positive or negative weight and as we run away from negative towards positive, we may find it emotionally challenging to be in what we believe is negative space. Letting go of the weight we give, we flow with life gracefully realigning ourselves with reality that knows no division. As it happens my knee injury wasn’t as bad as I thought but it clearly showed me that:

Accidents, traumas, challenges are there so sweet surrender can be remembered.

I guess the goal of all religions is to teach surrender and they each go about it differently. Life happens and there is two ways of living it: With resistance or without. Now it’s up to us to decide. I’d have to agree with Deepak Chopra who said ‘happiness is a continuation of happenings which are not resisted’ and I’d add ‘yoga teaches the art of no-resistance and takes us to the depth of its meaning’.