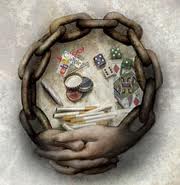 Addiction is the physical and/or psychological dependency upon a subject or object, which leads to a downward spiral of negativity, where ‘rock bottom’ is seen as a place of intense or unbearable suffering.
The compulsive behaviour accompanying addiction often veers one to an uncontrollable path. Addictions manifest in intriguing ways; smoking, eating, narcotics and alcohol are the more traditional varieties. 21st Century media has hooked many to an array of alternatives; internet gambling, shopping, social networking,
sex, mobile phones and infinite t.v.

The irresistible urge one may feel to satiate any of these desires is known as ‘the knee jerk reaction’. Such tendency may be genetic and/or conditioned and both involve neuro-chemical behaviour that issues demands to prescribe a ‘hit’. After some time, many minds ask “why?” This inquiry arises from countless episodes of suffering, out of which stem the realisation that banging one’s head against a brick wall can be injurious.
For most, addictions are escapism, attempting to avoid emotions like anxiety and loneliness. As a young boy, I became addicted to medicines (that relieved asthma and allergies) and the thinking and behaviour that accompanied them.

Many years later I saw the cause in the effect. I realised these apparently ‘non physical’ patterns of thinking and feeling create the loop of incarnation. Every time I needed medicine, there was a re-action and I was submerged in an endless drama. One day my unconscious mind spoke to me about attachment as I found myself jotting, “Before and After”. What I saw was that the highs of addiction are accompanied by lows, during as well as after the influence of any substance. Following further examination I found that ecstatic moments can be experienced while withdrawing, abstaining and during retraining periods. What else is the ‘high’ other than the mind’s mistaking the superimposed delight for its non-corporeal self, the true light of experience.

I began to find comfort within discomfort as
“what am I running from?” echoed outward from my core.

One can act or re-act. The former arises out of emptiness, which means anything is possible. The latter, memory, means watching repeats.
How many times have you seen, clutching to pleasure invites pain. What is this pain other than the guru? The addict escapes moments of dis-ease, where they avoid facing withdrawal, which is as much a part of the addictive cycle and fix as the ‘high’.

Interestingly, the symptoms are things like drug addiction, the causes lie within us. To know the world, look within. Today my symptoms are ‘one bar of Green and Black’s too many’. This doesn’t wake me in a sweat of fear in the middle of the night however!
Yoga is divine intervention. Learning to understand pain or discomfort during practice means we can ‘use it and not abuse it’. If you are suffering, how many times a day are you crucifying yourself?
I believe the cure is in the pain. I am not suggesting that yoga is painful but that pain exists to advise us, as does the awareness of our mortality. Years past, in my kung-fu training, I would stand in a horse stance for an hour and suffer, forcing myself to achieve. I was addicted to feeling physical pain and emotional inadequacy.
I have now learned acceptance which leads to the surrender that I am not the doer. I see that I sometimes carry the cross still, but most of the suffering and pain has ended. The discomfort is my work in progress.

Through mindfulness one becomes mindless.
Or as the mother says to her child,
There, there, never mind.

This allows you to find your still edge, where pranayama occurs in asana, or absorption in mudra and bandha, where you experience humanity, being breathed. I know this absorption as Soul and dwell in it daily.

To transcend, the addict must admit addiction and weakness. This births inner acceptance, which enlightens awareness of the deepest self. This happens because when this thought “I am addicted” nestles into the unconscious mind, the higher intellect reveals that “I am” is separate from “addicted”. That’s essentially it. The rest could be seen as choice. Shall I nourish the ‘I am’ or the “I am addicted”?

I’m not suggesting that total relief is instantaneous, but that if you believe the above to be true, then it can be. At the very least, the shift towards ending the suffering begins immediately.

Yoga practice reveals the inner Self is the medicine and that when pain is over; it displays an element of illusion. Experience of ‘an inner self’ is the awakening from the dream that ‘this is all there is’, transforming the mundane into ever new joy. This Self progressively reveals its God-like nature. This is what we have been looking for and awareness chuckles “this is what you have been running away from”.

When we are ready to accept freedom, peace and joy as our birthright, then we are ready to move beyond limiting beliefs such as ‘I need this habit to survive’. In the same way that bandhas are locks which restrain energy and an asana has a zenith beyond which it is termed by another name; one becomes aware of the limiting patterns of an addiction and how yoga practice facilitates a cure.

It teaches us how and when to apply and balance tension and relaxation. An excess of either can be painful. One reaches a milestone where sight of superfluous and detrimental factors arises. At this point it can be easy to let them go. When I take off my reading glasses it doesn’t mean I can no longer breathe. Knowing this, one can conquer old patterns, which have the knack of appearing in new guises.

The wisdom of the body is so great that upon inquiry, it learns to reject things which drain its re-serves. We learn to take refuge in the awakened one within, where stillness and movement intertwine in an ever renewing state.

Warrior and horse poses for confidence. Inversions (to give an inverted perspective of one’s current position); standing forward bend, downward dog, plough, shoulderstand and headstand (or half headstand or rabbit).

Kapal Bhati on You Tube

Bhastrika for strengthening, cleansing and further raising the vitality. This and Kapal Bhati will increase willpower and raise the generative force through the vital centres of the physical and subtle bodies. This elevation transmutes into spiritual awareness, which may have been snoozing up to this point. Sustained and careful practice removes one from attachment and therefore addiction.

The Bellows Breath On You Tube

Ujjayi breath for calming the nerves and attuning to the inner self. Develops inner grip through the subtle contraction within the throat and how this relates to the other diaphragms, all other connective tissue, the organs and glands, the subatomic and Atmic.

Yoga Nidra (yogic sleep) and Meditation – both play a critical role in helping one to view the unconscious patterns and habitual negative belief systems. With practice these are remedied as they are torn away at their root. They are rewritten with positive feelings and thinking, using Sankalpa (harmonious intention) to give life to a new seed of being. Apply Ujjayi breathing with Antar Mouna, which is to meditate upon the inner silence.