In the film “Shawshank Redemption”, following an inmate called Brook, committing suicide after being freed from living in prison for 50 years, Morgan Freeman (Red), says to Tim Robbins (Andy): ‘These walls are funny. First you hate’em, then you get used to’em. Enough time passes and you get to depend on them. That’s institutionalised.’ 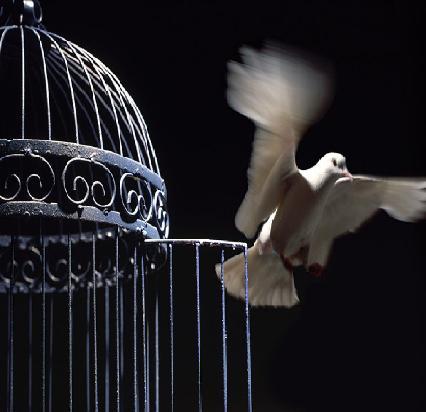 When I heard these words, it reminded me that we are all, in a way, institutionalised in the prison walls of the ego. Having wondered and pondered to finally make peace with the ego resurfacing over and over again, I came to the conclusion that its resurfacing was a requirement for a smooth, calm path to true freedom.

Brook felt safe in prison, he was somebody, he had an identity. He knew the rules, the game and everything made sense. The rules he knew clashed with the outside world and although he was now free, the freedom lay heavy on his soul. He could no longer function as all that he’d learnt, was of no use. Inside the walls, there was safety, familiarity, meaning and a sense of control; outside, uncertainly, the unknown and mystery.
The two sides of the walls were so different that he was incapable of marrying them and got lost in the process.

Freedom is something to get used to slowly so that the being can gradually adapt to letting go to the source and find safety in the unknown, security in insecurity and meaning in the mysterious. Years ago, I found myself swearing and cursing from the depth of my heart at the universe / the source because I couldn’t let go of the ego. Today, when it emerges, I thank God. For my coming back to prison, is my way to adapt slowly to the immense power, charge and magnificence of the source.
If Brook had a choice and wanted to be a free man, he would have probably gone back inside every now and again to slowly adjust to the free world. Once he had tasted the peace, the ease and comfort of not having to ask for permission for his next move and for being liberated of the strict and inhibiting life inside, he would have naturally chosen to stay out ‘alive’. If he’d spent enough time outside, while being able to go in when he pleased, the pain of being locked out would come to the surface and he would no longer ‘choose’ to go back.

The pain and darkness of being inside becomes truly apparent by having something to compare it with: the bliss and the light of being free. Only when it becomes totally clear by way of comparison, do we stop choosing the walls. Until then, let the Brook in your being slowly get used to the intensity and magnificence of the free world within.

On the spiritual path the fire of intense desire for freedom has been mentioned by many saints. It is that fire that will keep us on the path, until eventually even the concept of freedom is also thrown away!!

When we get out of the glass bottles of our own ego,
and when we escape like squirrels from turning in the cages of our personality
and get into the forest again,
we shall shiver with cold and fright
but things will happen to us
so that we don’t know ourselves.

Cool, unlying life will rush in,
and passion will make our bodies taut with power,
we shall stamp our feet with new power
and old things will fall down,
we shall laugh, and institutions will curl up like burnt paper.
“Escape” by D. H. Lawrence