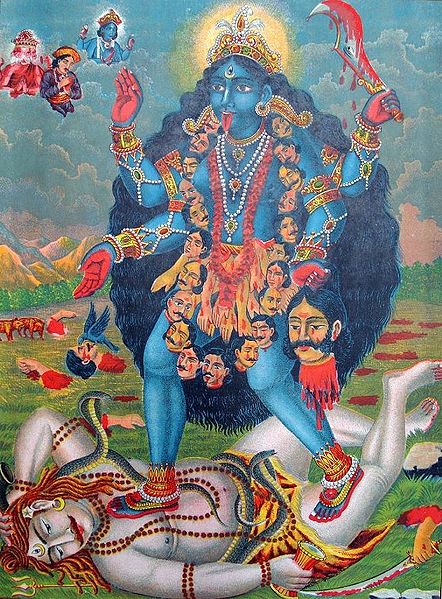 I sat to do a short practice, checking my alignment making sure that all my joints were happy and in good place and closed my eyes to tune in. I was so surprised to notice an inner hardness. If I was to name that hardness/tension I would say it was control born out of fear.

I became aware of Kali (The Hindu Goddess that represents the destroyer aspect of the divine). She looks fierce with her tongue lolling out; in her many hands, she holds swords and cleavers and a severed head. She’s the most frightening looking goddess who uses human skulls as garments. She represents the aspect of the divine that would destroy illusion, the ego / the sense of separateness and would not stop at anything! In spite of her seemingly terrible form, Kali is often considered the kindest and most loving of all the Hindu goddesses, as she is regarded as the Mother of the whole Universe.

She is also known to hold two of her hands in two mudras (hand gestures), one that says ‘fear not’ and the other ‘offering blessing’. In the instance I became aware of fear, I became aware of her and I could hear her message loud and clear. Fear not; relax in my arms regardless of how fierce, scary and frightening I look. Her gentle and compassionate voice filled my heart with love and trust. I knew she could crush me in an instant and also knew that when my heart was filled with her love nothing mattered. Her invitation is to trust, to let go of the illusion of control and then relax. I melted in her arms, knowing full well I had no power in her presence.

In the last few weeks she’s been present in my mind. I am learning more and more that we never know the outcome of what we do. With our best intentions, the worst can always happen and there is no way of controlling life to avoid the ‘unwanted’. When she hands you the unwanted, you carry on trusting that she knows best. That doesn’t mean running after the unwanted or not going for what you want. Quite the opposite; go for what you want, and move away from what you don’t want, but LET GO OF THE OUTCOME and TRUST. As Matt says ‘let life take care‘.

During the day, so many times we are given the opportunity to see how much we trust and how much we fear. I mean even, in the most trivial things, there is an opportunity: to check if we’re in a ‘trust and relax’ mode or ‘fear and control’ mode. It’s easy to know: one feels gentle and soft, the other tense and hard. Then the big question comes, can I do what I’m doing while remaining soft? What happens if I do?

What life has taught me so far is that I cannot conclude that ‘fear and control’ is bad and instead ‘trust and relax’ is good. I don’t need to put them in a box and define them as good or bad. Trusting Kali fully if I see a tiger running towards me I’ll fear and run for my life and I WILL TENSE UP – I very much doubt that, with a tiger chasing me, I’ll be dancing and chanting to Kali with a big smile on my face!! 🙂 Believing Kali’s the one with power, I’ll run intensely knowing full well the outcome is not up to me and, that can release something, soften something inside which I have difficulty finding words for.

With trust, that tension changes energetically – a gentleness finds its way to it which transforms hard and harsh to power and strength.

Control – I’ve come to see – is an illusion. We think we have it because, we see that – sometimes – what we do affects the outcome in the way that we want it. Until one day it doesn’t. The illusion of control disappears and life takes an unexpected turn. An Indian spiritual master once said:

I can see his point!

We all have to face that day when we leave this world, when we’ll have to truly let go of the illusion of control. So many, reading or hearing this will cringe and won’t even want to think about it. In reality, in the knowing of it, in the knowing of the fact that there is no control and no way to guarantee that our endeavours will FIX THAT PROBLEM, life becomes lighter. We are born to know where home is. We have a chance to live a full life till our very last breath, a life free of a struggle that suffocate the life out of us! Kali will show us time and time again, where home is: in her arms, trusting. And, we’ll forget and she’ll remind us again. The struggle will continue, until we are fully ready to go the abyss of silence and, to give it all up for her love.