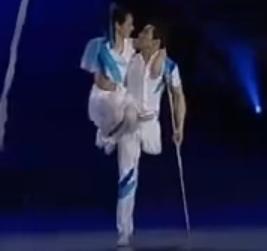 In a Chinese modern dance competition on TV one very unique couple won one of the top prizes. The lady, in her 30’s, was a dancer who had trained since she was a little girl. Later in life, she lost her entire left arm in an accident and fell into a state of depression for a few years. Someone then asked her to coach a Children’s dancing group. From that point on, she realized that she could not forget dancing. She still loved to dance and wanted to dance again. So, she started to do some of her old routines, but, having lost her arm, she had also lost her balance. It took a while before she could even make simple turns and spins without falling. Then she heard of a man in his 20s who had lost a leg in an accident. He had also fallen into the usual denial, depression and anger type of emotional roller coaster. But, she was determined to find him and persuade him to dance with her. He had never danced, and to dance with one leg…are you joking with me?
“No way!” But, she didn’t give up and he reluctantly agreed thinking, “I have nothing else to do anyway.” She started to teach him dancing. The two broke up a few times because he had no concept of using muscle, how to control his body, and knew none of the basic things about dancing. When she became frustrated and lost patience with him, he would walk out. Eventually, they came back together and started training seriously. They hired a choreographer to design routines for them. She would fly high with both arms flying in the air. He could bend horizontally supported by one leg with her leaning on him, etc. In the competition, as you will see, they dance beautifully and they legitimately won the competition.” When I watched this I didn’t even realize that she was missing an arm because I was focusing on the guy with only one leg. Really quite amazing! I became aware that the woman’s right arm was missing about 1/4 of the time into the clip.